A goddess of seduction

Peitho is seen as the opposite of Bia, the goddess or personification of force, anger and raw energy.

In ancient Greek, Peitho was associated with the arrangement of marriages, where a suitor would need to be persuasive to win the approval of a woman´s guardian and negotiate a bridal price.

Plutarch included Peitho on a list of five deities for new couples to pray to. (The other four are Aphrodite, Artemis, Zeus/Teleios, and Hera/Teleia.) He also wrote about how persuasion within a marriage can help the spouses achieve their wants without quarrelling.

In Aeschylus play Eumenides, written in the 5th century BC, the goddess Athena thanks Peitho after convincing the Furies of their reasoning in acquitting Orestes and defusing strife.

In his play Agamemnon, Eumenides highlights a darker side of Petho´s art, letting Clytemnestra curse Peitho when Paris has managed to persuade Helen to come with him. Clytemnestra also uses persuasion to convince princess Cassandra to come into a house where Clytemnestra can attack and kill her. 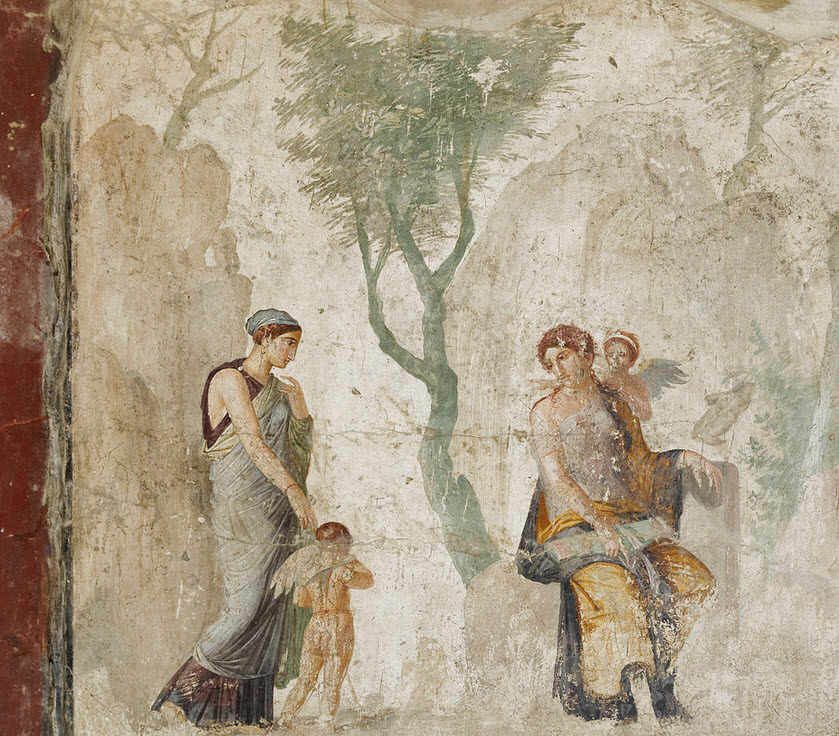 The cults of Peitho

The oldest known examples of cults dedicated to Peitho are from the early 5th century BCE. She was worshiped as a goddess of both sexual and rhetorical persuasion in Athens from the 4th century BCE into the Roman Imperial era.

Peitho seems to have been especially important in Athens and Argos, where she symbolized civic harmony and harmony within interpersonal relationships. According to Athenian legend, the unification of the city by Theseus was only possible thanks to the support given by Aphrodite and Peitho, who promoted cooperation and a democratic mindset in the population. Pausanias writes about how Theseus, after the unification, set up a cult of Aphrodite and Peitho on the south slope of the Acropolis of Athens.

The Athenians and other residents on the Attic peninsula worshipped Aphrodite and Peitho during the Attic Aphrodisia Festival each year. Another example of Peitho´s importance to the Athenians is that the Theatre of Dionysus, on the southern slope of the Akropolis hill, had seat reserved for the priestess of Peitho.

Examples of Peitho cults in Peloponnese

In Peloponnese, a peninsula in southern Greece, Peitho was associated with Artemis rather than with Aphrodite.

In the Peloponnese city Argos, one of the oldest continuously inhabited cities in the world, a temple was either devoted to both Artemis and Peitho, or Peitho was used as an epithet for Artemis. This temple was also devoted to Hypermestra, the only Danaid who did not murder her husband on her wedding night.

Pindar, an Ancient Greek lyric poet from Thebes, refers to courtesans and prostitutes in Corinth as “the servants of Peitho”. This phrase has stirred some debate among scholars. Was perhaps sacred prostitution was practiced in Corinth?

In Sicyon, another city in Peloponnese, a temple was devoted to Peitho and the cult of her was connected to the cults of both Artemis and Apollo. During the festival of Apollo, seven boys and girls would carry statues of Artemis and Apollo to the Synthas River and then to the sanctuary of Peitho, before bringing them back to the Temple of Apollo again.

According to local legend, the denizens of Sicyon had refused to purify Artemis and Apollo after the slaying of Python. This refusal was punished with a plague. To stop the plague, seven boys and girls went to the Synthas River to persuade the gods to end the plague. Their quest was successful, which in turn indicated that even gods can be susceptible to the power of persuasion. Accordingly, a sanctuary dedicated to Peitho was created at that spot by the river.

Sauda, or Suadela, is the Roman equivalent of the Greek Peitho.