Mutunus Tutunus is a Roman god associated with marriage and weddings. He is a phallic god and can in many ways be considered the Roman equivalent of the Greek Priapus.

Much of what we know about Mutunus Tutunus and the cult of this deity comes from the writings of the 2nd-century grammarian Festus. His writings about this god are the only ones that have survived from the classical Latin era.

Writings about Mutunus Tutunus by Early Christian Church Fathers (ancient and influential Christian writers) are likely to be hostile and biased since they strived to condemn the Roman and Greek religions in favour of Christianity.

According to the Christian apologist Arnobius, Roman matrons were taken for a ride (inequitare) on the “awful phallus” of Mutunus with its “immense shameful parts”. Other sources say that Roman brides straddled the phallus of Mutunus during preliminary wedding rites to prepare themselves for intercourse and learn not to be embarrassed by sex.

In the city of Rome, a shrine dedicated to Mutunus Tutunus was located on the Velian Hill, until the 1st century BC. The Velian Hill is a spur streching out from the middle of the north side of the Palatine Hill, towards the Oppian Hill. According to Roman legends, the shrine to Mutunus Tutunus had been there since the founding of Rome.

Archaeological investigations have not been able to find any remnants of this shrine. According to Festus, it was demolished to create a privat bath, even though it was revered by the city population and considered one of Rome´s most ancient landmarks. The bath was for the pontifex Domitius Calvinus, who supported Augustus, the Roman statesman who became the first emperor of the Roman Empire. 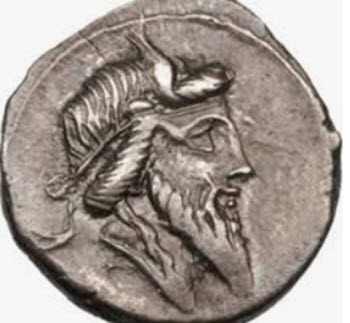 A ancient coin dated to circa 90-88 B.C might depict an ageing and bearded Priapus or Mutunus Tutunus on the obverse, but the experts are not in consensus about this. The coin is a denarius and was minted by the moneyer Quintus Titius. The person on the coin is wearing a winged diadem, which could be a reference to Priapus of Lampsacus and to the winged phallus which is a common motif in Roman decorative arts. (The winged phallus was believed to protect against the evil eye.)