Aphrodite is an ancient Greek goddess associated with love, passion, procreation and pleasure. In Laconia, she was also considered a goddess of war.

Important cult centres for Aphrodite in the classic world was Cythera, Athens, Cyprus and Corinth. Her main festival, Aphrodisia, was celebrated around the time of the summer solstice each year. 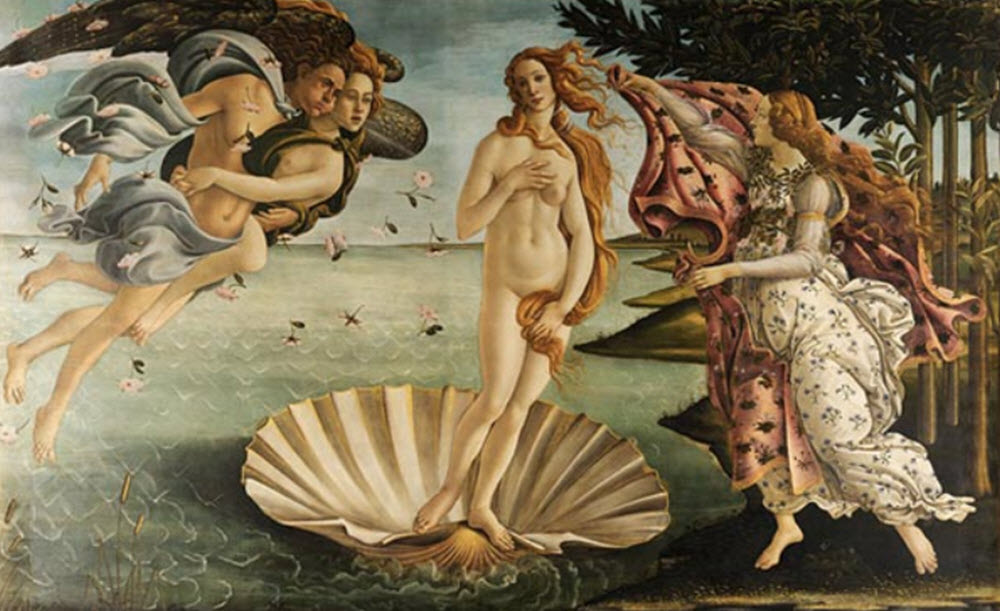 The cult of Aphrodite in ancient Greek is believed to be heavily derived from the Phoenician practise of celebrating the goddess Astarte. Astarte was in turn a cognate of the East Semitic goddess Ishtar, and the roots of Ishtar can be found in the Sumarian cult of Inanna.

Aphrodite is consistently described as having had no childhood – she was an adult woman right from the start.

In his Theogony, Hesiod tells us that Aphrodite was born from sea foam off the coast of Cythera. Cythera, also known as Kythira, is an island located opposite from the south-eastern tip of the Peloponnese peninsula. Hesiod also lets us know that Aphrodite was produced by the genitals of Uranus ending up in the sea. Uranus´ son Cronus cut off his father´s genitals and threw them into the sea, and the result was Aphrodite.

In the Illiad, Homer provides us with a different explanation to Aphrodite´s existence. According to him, Aphrodite is the daughter of Zeus and the Titaness Dione.

Yet another origin story claim that Aphrodite was born near Paphos on the island Cyprus. In the ancient world, Paphos was a major cult center for Aphrodite, and the Sanctuary of Aphrodite Paphia was an important place of pilgrimage. In the poetic works of Sappho, Aphrodite is commonly referred to as the Cyprian.

In Greek mythology, Aphrodite was married to Hephaestus, the god of metalworking. She also had many other lovers – both gods and mortals. She had many children with her various lovers, but no known offspring with her husband Hephaestus.

Exactly which children she had will vary depending on which Greek stories you are reading. Here are a few examples of the children that has been assigned to her by some (but not all) sources:

In Greek stories, Aphrodite is often in the company of Eros, a god of lust and sexual desire, and Himeros, who represents desire and unrequited love. In early Greek art, Eros and Himeros are typically depicted as handsome youths with wings.

The three Charites – Aglea (Splendor), Thalia (Aboundance) and Euphrosyne (Good Cheer) are important attendants for Aphrodite. In some stories, she is their mother. In others, they are the children of Zeus and Euronyme.